On Saturday, 12 August, two students from Bridge House School, Anaïs Masson and Ross Gauntlett, and two students from Franschhoek High School, Luvo Gcuku and Zenande Tunguntwana, took part in the 2017 SAMUN debate at the Western Cape Legislature. The team represented Kenya in the debate with the theme, “Were reparations necessary for colonialism?”  The Franschhoek team did the valley proud by coming out tops in this keenly contested competition.

“The South African Model United Nations (SAMUN) is a dynamic Education Africa project based on the principles and format of a UN General Assembly debate, with a focus on the United Nations, global issues, international relations and human rights issues. Teams from participating schools are engaged in General Assembly-style debates, representing the viewpoints of their allocated country.”

The debate began with the Franschhoek team’s opening speaker, Zenande Tunguntwana, addressing the speaker and other ‘delegates’. She answered several key questions in her speech, whilst being empathetic and impersonating the way Kenyan delegates would address the UN assembly. Next up was the formal caucus, where Ross Gauntlett was the first caucus speaker.  He delivered a minute-long response to the other countries’ opening speeches after which the second caucus speaker, Anaïs Masson, responded.

Next up was the informal caucus, where delegates met for an hour to draw up a ‘working document’ or to negotiate with another team that already had a working document. Then came the voting, where only three ‘working documents’ would be read out aloud to the delegates. Finally, the Kenyan team’s closing speaker, Luvo Gcuku, ended off the debate by explaining to the assembly why the team voted the way they did.

Then came the tense moment: the announcement of the results. The adjudicators announced that Team Belgium had come third and Team China had come second. After a long and dramatic pause, Team Kenya (represented by the students from Bridge House and Franschhoek High) was announced as the overall winner of the Provincial debate. The Team will now go on to compete in the National SAMUN debate in October at the CTICC. 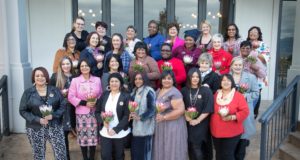