La Petite Ferme is a Cape Winelands tourism institution. With accommodation, a restaurant and boutique winery it has been offering many a seasoned traveller the complete winelands experience. The secret behind La Petite Ferme’s many successful years is the ability to re-invent itself and keep delivering a relevant and high quality product to each visitor while still keeping its welcoming and heart-warming hospitality at the core.

When Chef Neethling decided that it is time to move on to the next challenge on his culinary journey the restaurant at La Petite Ferme needed a new leader. In stepped executive chef Sidwell Yarrow. Chef Sidwell’s experience is extensive at the young age of 35 for an executive chef. Born in Stellenbosch and growing up in Somerset West the first position he held was under Craig Cormack at Spier Wine Estate in 2003. Since those early days Sidwell has gone on to apply his trade across the world and has worked under numerous world renowned chefs. He has called countries such as the USA, UK and Dubai his home for periods during his career. It was however while working under chefs Tony Larsen and Todd Feit at the Club at Admiral’s Cove in Jupiter, Florida, where Sidwell decided that culinary career is definitely what he wants.

In 2010 while working at the Madinat Jumeirah Resort in Dubai Chef Sidwell was named runner up in the Chef of the Year competition hosted by the Emirates Culinary Guild and achieved both silver and bronze medals in respective categories in a very competitive market with some of the world’s best chefs. A major part of his career was spent working at sea and for 8 years Sidwell worked his way up the ranks aboard ultra-luxury cruise ships, yachts and ocean liners such as the mighty Queen Elizabeth 2 and Queen Mary 2. He spent his last 3 years at Silversea Cruises as Executive Chef overseeing the entire culinary operation over 6 restaurants in its classic fleet.

Chef Sidwell’s career highlights include having had the opportunity to work along-side some of the industry’s best, such as Michelin star chefs Heston Blumenthal, Nino Di Costanzo, Neil Perry and Michael Caine. Chef Sidwell has also cooked for many celebrities, presidents, royalties and music icons such as Bon Jovi, Metallica, Kathrine Jenkins, Celine Dion, Andrea Bocelli to name a few.

The restaurant at La Petite Ferme focusses on sourcing the freshest seasonal ingredients grown in the valley for a sustainable menu, expertly cooked and plated in a harmonious, elegant yet satisfying manner. Sourcing food locally promotes the local economy, shortens supply chains and creates seasonal options which guarantee quality and freshness.

Of course a great chef needs to be aided by an exceptional team and in recently appointed sous chef Blaine Coetzer and pastry chef Oscar Baard, he will find the perfect balance of skill, commitment and passion.  Both of them come with their own experience with sous chef Blaine previously working at The Leeu Collection and pastry chef Oscar working with chefs such as Jonathan Gargan and Marco Marongiu. 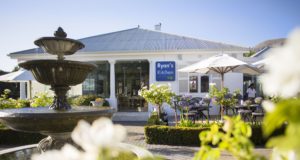 Let’s talk about the (Black) Elephant in the room…

Siegfried Schäfer - 2nd Jan 2017
Born out of synchronicity, fortuitous friendships and a love of wine, Black Elephant Vintners has extended that passion into partnering its wine collection with...