The first major winter storm hit Franschhoek and large parts of the Western Cape on 6 and 7 June.  In anticipation of severe conditions the Western Cape Education Department had taken the precaution of closing all Western Cape Schools on the seventh.

Gale force winds hit the Tuesday evening, accompanied by rain, which continued on Wednesday.  Approximately 45mm of rain fell over the two days, while the first snow fall of the winter was also recorded.

Electricity supply to much of the valley and other nearby areas, such as Kylemore and Languedoc was disrupted as a result of downed powerlines. Supply was restored to Franschhoek in less than 24 hours, but in other places it took much longer.

In total 140 families were affected with incidents ranging from complete collapse of structures to leaking roofs in the informal settlements and the village. Twenty-one structures were destroyed. In addition to the inclement weather disaster management staff and volunteers also had to contend with downed electrical cables.

At Bridge House school some damage was done to a classroom ceiling, prefabricated workshop buildings, some gutters, fences and trees.

As is often the case the disaster brought the community together with generous donations of food and materials being received.

A local disaster volunteer WhatsApp group was created with many community members participating.  This platform was used as the primary means of communication between Stellenbosch Municipality’s Disaster Management Department and volunteers.

A request from the Disaster Management Department for sand bags led to 400 sand bags quickly being donated and delivered to the La Motte Fire Station.  Local disaster management volunteers filled the bags with sand from the nearby La Motte Plantation.  The operational team worked throughout the night distributing sand bags to divert water and placing them on roofs as a precautionary measure.

Batho’s Place was turned into the base camp for relief efforts.  From here the operational team also coordinated the feeding of both the displaced and volunteers.

Foliage Chef Chris Erasmus was one of the first to volunteer. The restaurant took on the responsibilities of receiving food donations, preparing food and distributing it. Soup and bread was provided to between 300 and 400 persons.

According to Hemisphere EPC’s Ashley Bauer, who was at the centre of relief efforts, community resilience was again highlighted in the disaster. “The council is in the process of conducting ward-based risk assessments which will provide clear information on the risk in our valley. Going forward the community should use the information to implement mitigation and response protocols,” he said.

The first winter snow was welcomed as it provided much-needed slow-runoff water for the almost empty dams in the area. Areas affected by veld fires during summer also benefit more from slow runoff / rain rather than sudden downpours that increase the risk of severe erosion. Dam levels on average increased by approximately 1,5% after the storm. 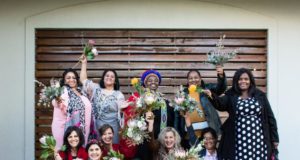