Environmental authorities and hazmat technicians are still busy with cleaning up and monitoring operations at the site of the chemical spill that took place on the Franschhoek Pass on 5 September 2016. The spill was the result of a trailer carrying agricultural chemicals catching fire and going up in flames.

Since the spill contaminated surface-runoff and soil has been removed from beside the pass road and along the gully into which the chemicals – along with runoff from the firefighting efforts – flowed.  As part of the clean-up process soil and groundwater samples have been collected and sent for analysis. Somewhat ironically the current drought has been a boon to clean-up efforts as the lack of rain has helped prevent the contamination from spreading further.

The primary concern remains that dangerous chemicals could make it into the groundwater supply of properties downhill from the spill site.  Samples have been and continue to be taken of streams, springs and boreholes in the area. Every round of sampling has been sent to Europe where the samples underwent a TerrAtesT test.

A downhill property owner, who prefers not to be named, has shared several concerns with the Tatler since the incident took place.  These included:

·         Not all boreholes and springs on his property were timeously tested,

·         Difficulty in obtaining the complete cargo list of the truck,

·         Lack of clarity as to whether samples tested in Holland were tested for the presence of glyphosate (a commonly used and controversial herbicide),

·         The fact that all contaminated soil wasn’t removed during the dry season (approximately 60 tonnes were removed),

·         The siting of containment ponds against a fence that could be swept away in the event of heavy rains, and

·         The way and area in which remediation agents were applied.

The latest water samples were taken on 24 March 2017 and included all boreholes on the down-hill property.  These samples were analysed for the complete suite of possible contaminants as well as glyphosate. No glyphosate, or any other chemical associated with the spill, was detected in this sample. . A subsequent round of sampling on 26 April 2017 – the main purpose of which was to determine the effectiveness of the remediation agent in breaking down remaining chemicals from the spill – has since been taken and sent for analysis. 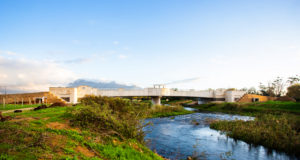