Franschhoek High School’s first netball team is going into the netball season with brand new uniforms thanks to the generosity of Terbodore Coffee Roasters and a little help from local resident Amy Kleinhans.

Amy’s housekeeper, whose daughter plays for the team, approached her to help find a sponsor for new uniforms as their old ones were in a dire state. Amy approached Michael Macaskill and the team at Terbodore Coffee Roasters and they immediately came on board as the anchor sponsor for the new uniforms.

On 24 April the team and their coach met with Amy and Alrishka Macaskill to enjoy a coffee at the Big Dog Café and to show off their new uniforms. Their coach says the new uniforms are motivating the team to do well this season. 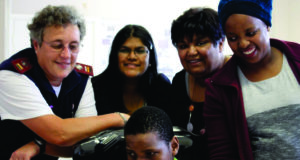 Siegfried Schäfer - 1st Jan 2019
Bridge House School started working with Bread Tags for Wheelchairs in March 2017. Since linking up with them they have been able to secure...