What started out as friendly banter between two friends on a golf course, quickly turned into a dynamic partnership when celebrity chef Reuben Riffel bought into Franschhoek businessman Alex McCormack’s vision to produce a world-class range of handcrafted beers, bearing the name of the town – known as the country’s culinary capital.

Capitalising on its French heritage the region has become world renowned for food and wine of the highest standard, punching well above its weight on a global scale. McCormack saw an opportunity for the region to also become famous for world-class beer.

Alex McCormack, original founder of The Franschhoek Beer Co, together with the other founding partner, American businessman Frank Rodriguez (a Franschhoek resident for more than a decade) and brewmaster Olaf Morgenroth, have spent the past two years travelling the world for inspiration, experimenting with different recipes and ingredients and applying their collective skill and passion to develop a range of beers that are truly worthy of the world-class standards the Franschhoek Valley sets for products from this origin.

Each of the hand-crafted beers (there are four launch styles) is made with the purest Franschhoek mountain spring water and the best quality, imported hops and malt available to ensure a superior quality beer that the team are confident will be enjoyed by discerning beer lovers all over the world. Specialized brewing equipment, imported from Italy, ensures that the taste of every handcrafted bottle of beer remains consistent. Never cutting corners, never compromising, never saying good enough, much like the team, these beers are destined to become much loved and appreciated the world over.

The handcrafted, world-class beers from The Franschhoek Beer Co are currently available for distribution and sales in Franschhoek at La Cotte Inn Wine Sales, and other fine establishments, with plans to expand further into the Western Cape and beyond. 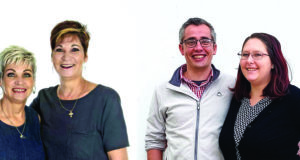 Siegfried Schäfer - 5th Nov 2020
The restauranteur sisters Emmarentia Klaasen and Joey Stiglingh, of Good Food & Co, have hung up their aprons and handed the keys to their...