In true Franschhoek fashion three local businesses have joined forces to tackle the twin problems of illegal dumping of refuse and littering – problems that have dramatically escalated in the past few months.

Paintsmiths, PicknPay and Col’Cacchio have combined to fund and employ a person, with his own bakkie, to patrol and clean areas that fall outside the municipality’s jurisdiction – such as along the Robertsvlei and Dassenberg Roads, at the Berg River Dam wall and carpark, around Matoppie and the area Berg River Dam area at the end of Robertsvlei Road.

The employee will carry a walkie talkie radio linked to Pepler Alarms, who will be informed when anyone is seen dumping illegally.

Hikers and bikers have over the past months noticed an alarming increase in the illegal dumping of household refuse and builder’s rubble. Paul Silberman of Paintsmiths urges homeowners who are undertaking renovations, particularly when using ‘informal/bakkie’ builders, to insist on seeing municipal receipts for the disposal of any rubble.  “Promises are not good enough,” he says “it’s on your conscience when your rubble ends up in a riverbed or other delicate ecosystem – as is often the case.”

PicknPay’s Arthur Black and Col’Cacchio’s Alexander de Vries point to another problem that has emerged. Criminal entrepreneurs are going to households offering them a refuse removal service at a lower rate than the municipal service. When the refuse is removed, it is simply dumped in a secluded area. Once again, the responsibility remains with homeowners to know where their refuse is going.

They also point out that legally waste, such as household refuse, actually belongs to Stellenbosch Municipality. Furthermore the Integrated Waste Management Bylaw requires that anybody removing household waste must be employed by the municipality or an accredited service provider contracted by the municipality. (Only businesses and industry are allowed to independently contract for waste removal.)

Private security companies are also lending support to the anti-dumping and littering initiative and it is expected that the illegal refuse entrepreneurs will soon be caught red-handed and charged. 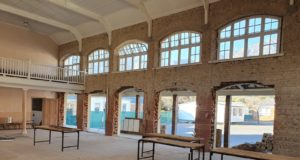 Siegfried Schäfer - 1st Oct 2020
There has, for some time now, been a sense in the village that something is afoot at Franschhoek High School. This is indeed the...