The Department of Rural Development and Land Reform announced in a press release on 31 May 2018 that it is to initiate a turnaround strategy and a restructuring of the operations at the Solms-Delta Wine Estate.

The Department acquired the estate in December 2016 as part of the pilot phase of the Policy Framework on Strengthening the Relative Rights of People working the Land. As part of this agreement workers acquired a 45% stake in the wine making business.

The aim of the acquisition was to secure tenure, maintain the jobs of farm workers and to give workers an opportunity to participate in the wine making business.  At the time, the farm was on the verge of collapse due to accumulated debt and poor management.

Despite the Department’s intervention, including the provision of financial support for the business, the estate continued to operate at a loss. A 2017 assessment put the losses down to:

·         Inefficiencies in the running of the hospitality business.

In July 2017 the directors voluntarily placed the company under business rescue, as the cash flow situation continued to deteriorate. A Business Rescue Practitioner (BRP) was appointed with effect from 27 July 2017.

The challenges that have arisen have forced the Department to cease the continued funding of Solms Delta in its present form, a move which is likely to lead to the liquidation of the business by the business rescue practitioner.

The Department says that “A solid turnaround strategy which will encompass diversification and restructuring of operations will ensure sustainability and profitability of the business.” It also added that it is “Committed to work with the farm workers to ensure that they are supported in order to continue operations in a manner which will secure their employment and improve their livelihoods. In addition to this the Department will also secure the property as the land owner.” 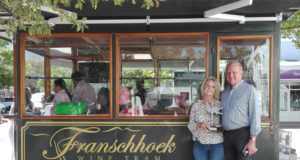 Siegfried Schäfer - 1st Jan 2019
Visitors to Franschhoek can now choose from no fewer than twenty-seven wine estates when booking their Franschhoek Wine Tram experience. “We are very excited about...