A late winter storm at the end of August led to the heaviest snow falls the valley had seen in at least 20 years.  As villagers know by now snow on the mountains means a busy weekend for those in the tourism sector.

While main road businesses benefitted from the visitor influx, most visitors were here for one reason: to get as close to the snow as they could. That meant a bumper weekend for the Mont Rochelle Nature Reserve at the top of the Franschhoek Pass.

Cars were already streaming up the pass at dawn on the Saturday morning. By midmorning the parking area in the reserve was overflowing and visitors were parking along the pass for more than a kilometre from the reserve’s gate.

According to a spokesperson for the reserve most visitors were well-behaved and kept to the rules – in particular the requirement to stick to the footpaths. Where people strayed off the footpaths significant damage was done to the fynbos, which is particularly brittle under very cold conditions. Paths also suffered under the heavy foot traffic. Reserve management has already undertaken remedial work to the footpaths and is exploring ways to encourage the trampled fynbos to recuperate.

In a novel incident a helicopter owner offered flights into the mountains for those who didn’t feel like hiking to the snow. These were however unauthorised – no landings are allowed in protected nature areas – and were reported to the aviation authorities.

While snowball fights and snowmen were the order of the day, one group of friends went the extra mile and built an igloo. This impressive, though technically illegal activity, garnered Wilroux Ackerman and his friends a fair bit of media attention.

Wilroux and his friends used a plastic container to make the ‘bricks’ for their igloo which they constructed on the Perdekop trail near the Wemmershoek lookout. They started work at 10h00 and completed their project around 5 hours and 366 ‘bricks’ later. His helpers were his sister, Lenchen-Marié Ackermann, Donovan Oliveros, Nicol Oliveros and Richard Smith.

NOTE: The management of the Mont Rochelle Nature Reserve wish to inform the public that they no longer accept cash payments at the reserve entrance. The public are requested to either pre-buy their permits via webtickets.co.za or bring a credit / debit card along. 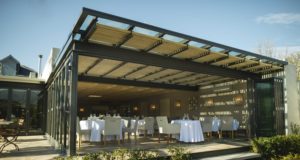 Siegfried Schäfer - 7th Jul 2018
Franschhoek spoils for choice when one is considering where to dine. The best of South Africa appears to be concentrated in the main street...