Mayor Gesie van Deventer officially opened the new Groendal Library on Friday, 7 September 2018.  The new library is a state-of-the-art green building and is also one of the first libraries in the province to be equipped with a section for the visually impaired.

Construction on the library began in May 2017. The total cost of the project was R8.663 million, of which the provincial government contributed R7 million and the municipality the remainder.

The new library replaces the previous container library that served the Groendal community since 2007.

Green features incorporated into the design include tanks to collect rainwater – which is used to flush the toilets, a water-wise indigenous garden and solar panels on the roof that provide in all its electricity needs.

This building is more than just a library; it is a fully-fledged community facility. There is a comprehensively equipped computer room with internet access and space for learners to study and do research. An early childhood development section has been incorporated and can be used by crèches and parents to help teach toddlers basic skills. There is also a library hall, which the community can use for meetings and special events.

“I am very proud of this facility and I want to encourage the community to make use of it to the fullest extent. Our library services will be partnering with various stakeholders to bring exciting interactive programmes to the library, encouraging a new generation of young readers. This facility will bring an opportunity for learning and knowledge to our residents, and I want to encourage them to use it and care for it so that it will be available for generations to come,” said Mayor Van Deventer.

Mayor Van Deventer focussed her speech on the theme of libraries as the ‘great equalisers’ in societies. Libraries do this, according to the American Library Association, because they “serve people of every age, education level, income level, ethnicity and physical ability. For many people, libraries provide resources that they could not otherwise afford – resources they need to live, learn, work and govern.” 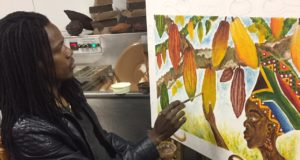 Siegfried Schäfer - 1st Jul 2018
Perhaps one day they will have a section in the National Gallery devoted to paintings done in chocolate. Well, so hopes Reason Ndlovu, a...