As the seriousness of the Coronavirus outbreak started hitting home in mid-March, a public handwashing station opened its taps at the PicknPay taxi rank. The station was the brainchild of Jeremy Astfalck whose antiques shop – The Old Corkscrew – is just across the road from the taxi rank. The Tatler asked him a few pertinent questions.

What gave you the idea for the handwashing station?

Early press warnings as to how important it would be to have the ability to wash or sanitise one’s hands. In our valley, the majority of our people will battle to afford hand sanitisers and other related products. The best solution is then a place where they can wash their hands before they get into taxis or when they arrive from home. More importantly, is the idea of education – by setting up the handwashing station the taxi drivers then had means of control over the uncertainty and worry that comes with battling an unknown epidemic. “Spreading the message, not the disease” has become the aim and has been well received.

Did anybody help with the materials and construction?

Support from Build It was fantastic with Jonathan Peach donating a lot of the required materials. As for construction, it was a case of a basic garden irrigation installation, being adapted to provide a setup that delivered water without waste. Credit here goes to Stephen from PicknPay who first mooted the idea of a micro-irrigation system.

Who supplies the water & soap?

Gable Manor, The Old Corkscrew and some private donors supplied soap and the water is currently supplied by the owners of the Franschhoek Centre.

Any comments from users?

Soon after the station opened an elderly lady commended the taxi drivers in their efforts to help and explain what this was all about. 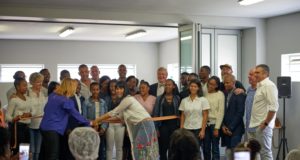