Coming up with a plausible April fool story is a challenge for every editor. It can’t be too obvious and needs just enough credibility to make it plausible. Like Goldilocks’ porridge it has to be just right. If you’re really lucky something occasionally falls in your lap… This is what happened to me at the end of August.  How I wished it were the ides of March instead!

With everything that comes across my desk I’m usually amongst the first to know of any significant developments in the valley.  I was therefore quite surprised to learn about a filling station that had been constructed almost overnight at the entrance to the Berg River Dam.  A bit of investigation however soon revealed that it was the set for a new BP advert that was being shot on location.

I’ll have to keep thinking! 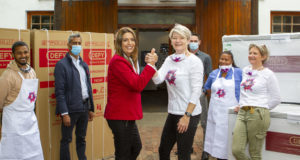 Siegfried Schäfer - 1st Feb 2021
Defy has donated various appliances to Margot Janse’s Isabelo charity as part of their campaign to recognise often unsung heroes. Janse was identified as a...