Le Lude received a visit from a high-level French delegation on Friday, 13 May. Le Lude’s owners, Nic and Ferda Barrow, received the delegation.

The group of three French senators and their secretary were accompanied by the French consul in Cape Town, M. Xavier dÁrgoeuves.  All three senators are members of the ‘Friendship Group France – South Africa, Lesotho, Swaziland’.  The head of the delegation Mme Michelle Demessine is the deputy-Chairwoman of the Commission on Foreign Affairs, Defence and Armed Forces and a former French Minister of Tourism. The second delegate, M. Joël Guerriau, is the Secretary of the Commission of Foreign Affairs, Defense and Armed Forces.

The third delegate, M. Louis-Jean de Nicolaÿ, is a senator from the Lude commune in the Sarthe District. He personally requested the visit to Le Lude as he is also the owner of the Château du Lude in the world-famous Loire Valley.

The Barrows have twice visited the Château du Lude. They were so taken by it and its name that when they decided to start an MCC cellar in Franschhoek there was only one choice for the name.

Paul Gerber, Le Lude’s winemaker, took the visitors on a tour of the cellar, followed by a tasting of Le Lude MCCs. The visitors were suitably impressed by the modern technology and hygiene of the compact cellar.  This impression extended to Le Lude’s MCCs, with the Brut Rosé in particular impressing M. de Nicolaÿ. All present were also treated to fantastic finger food prepared by the Barrows’ daughter Nicolene, who is the executive chef of the Orangerie Restaurant at the cellar.

M. de Nicolaÿ and Mrs Barrow discovered a shared love of gardens, with M. de Nicolaÿ promising to send Mrs Barrow cuttings of the rose named after his chateau. No doubt these cuttings will find as happy a home here as the French wine culture has. 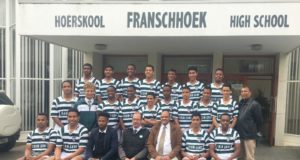 Siegfried Schäfer - 1st Sep 2018
Train Camp is a sports development company whose mission it is to create access for athletes at all levels to the very best coaching,...