The environmental authorisation application for a mixed-use development on erf 1692 has again publicly exposed rifts in the Franschhoek Claimants’ Trust (FCT) that owns the property and has given permission to Surrey Holmes Developments (Pty) Ltd to subdivide and develop the site.

According to a submission by the Franschhoek Concerned Claimants Group (FCCG) contained in the environmental authorisation application and signed by former Stellenbosch speaker Gordon Pheiffer, Erf 1692 – located at the eastern end of Reservoir Street above the Franschhoek Tennis Club – was given to Franschhoek land claimants by Stellenbosch Municipality. Three hectares of the original 5 ha site was subsequently sold to the developers of the Fransche Hoek Estate for R1.2 million.

The FCCG contends that the meeting where Surrey Holmes Developments was given permission to develop the site was unconstitutional and the resulting decisions invalid. They also claim that some of the R1.2 million has been squandered and/or misappropriated and have asked for an investigation.

The preferred development alternative considered in the Basic Assessment Report (BAR) provides for 28 single residential erven, three general residential erven, a general business erf and two open space erven. Because of the irregular shape of some erven in the area, the part of the site identified as a general business erf is on what is currently generally thought of as the Franschhoek Tennis Club’s parking area.

In addition to the issues relating to the FCT, other key issues and concerns raised in the public participation process were related to the project’s potential impacts on resources, service provision, sense of place / visual impacts and biodiversity impacts.

Heritage Western Cape has indicated “that there is no reason to believe that the proposed development will impact on heritage resources.”

Cape Nature does not support the development and is not in agreement with the conclusions reached by the botanical specialist retained by the developer. According to Cape Nature the site consists of critically endangered Swartland Alluvium Fynbos (SAF). According to the botanical specialist “the site is ecotonal – representing a transitional vegetation type between SAF and Boland Granite Fynbos (BGF) – with no species of conservation concern identified on the site.” Cape Nature is also of the view that the botanical assessment was not done at an optimal time of year for species identification and that the site is of sufficient size to be viably conserved – including controlled burns. The botanical expert disagrees with Cape Nature on both these issues.

The developer’s environmental authorisation application states that “The proposed development can be viewed as desirable for a number of reasons relating to the location (within the urban edge) and type of development (mixed-use). The development promotes spatial efficiency through compaction as opposed to sprawl; mixed-use as opposed to mono-functional land uses; residential areas close to work opportunities as opposed to dormitory settlement, and prioritisation of public transport over private car use.” 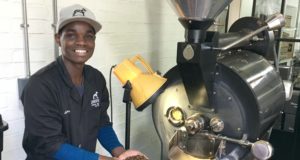 Siegfried Schäfer - 1st Oct 2018
Walking towards the entrance of the Big Dog Café the same thought always pops into my head: I wish that aroma could be bottled!...