Labradors, or Labs for short, usually evoke warm and fuzzy feelings, as they’re considered one of the gentlest dog breeds around. The same cannot be said about the new accommodation establishment, The LAB Lifestyle, with its Labrador logo that has been taking shape in Nerina Street over the past few months.

What has taken place at erf 660 in Nerina Street since October 2017 can only be described as a construction frenzy – an illegal one to boot.

The large, oft-altered 1970s house on erf 660 had until recently been used as a five-bedroom guest house. In October 2017 it was sold to Livinafrica (Pty) Ltd of which Mr Jos Balk is a director.  Shortly after the sale and before the property was transferred, dozens of construction workers moved into the property and commenced major construction work.  Soon after, neighbourhood residents learned that the new owner was planning a large guest house and spa on the residentially-zoned property.

In a brief response to the Tatler’s enquiries about the property the Municipal Manager, Geraldine Mettler, said that the municipality rejected the building plans for the property. She did however not provide any reasons why the plans were not approved. She continued to say that three stop works orders had been served. All three were ignored and, continued Ms Mettler, the municipality is proceeding to seek legal advice on the matter.

Ms Mettler also indicated that the municipality had met with the owner and made it clear to him that the property is not zoned for guest house use.  In response the owner declared his intention to bring a land-use application to allow part of the house to be used as a guest house.

The Tatler was also told that the police paid more than one visit to the site.

“The LAB Lifestyle” is described on its website as “an inspiring automated guest house where technology meets tranquillity and beauty”. Its main selling feature is the ‘LAB’ a voice-controlled smart home solution that, according to the website, will run guests a bath, make a cappuccino, reserve a restaurant table or book a spa treatment in the “futuristic dome structure” located on the premises. The website also claims that sustainable materials were used in the renovations, 100% of the energy is derived from the sun and that a “sophisticated water reclaiming and filtration system” has been installed. 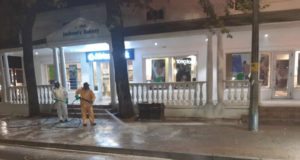 Siegfried Schäfer - 6th Apr 2020
THE FOLLOWING IS A LETTER ISSUED TO STELLENBOSCH COMMUNITIES BY MAYOR GESIE VAN DEVENTER TODAY, 06 APRIL 2020 Dear Resident It is sad but indisputable that...