Stellenbosch has a new DA MP.  James Vos has replaced Andricus van der Westhuizen, who has been assigned to the George constituency. Vos serves as the Shadow Minister of Tourism.

In other political news James Selfe, Chairman of the DA’s Federal Council, confirmed in early May that a large majority of the Stellenbosch Town Council’s DA caucus asked permission to table a motion of no confidence in the council’s speaker, Cllr Donovan Joubert. This permission was granted and according to the Eikestadnuus the motion was to have been tabled at a DA caucus meeting on 16 May.

At the time of going to press the outcome of the motion was still unknown, but should it have been successful the issue would have been referred back to the DA’s Federal Executive Committee to decide on the way forward. Selfe said that in that case the Federal Executive Committee would have to decide whether to ask the speaker to resign or not. As part of the process the speaker would have the opportunity to present reasons why he should not resign.

Selfe continued to explain the process by saying that “Should the executive committee decide that the person should resign, he has 48 hours to do so. If he does not resign, his membership, also as a member of the council, will be ended. In such an event the caucus has to elect a new speaker. The new speaker then also has to be approved by the Federal Council.” 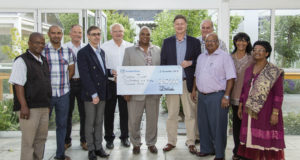