Users of water from the La Cotte stream have been complaining of pollution in the stream since late November 2016. Problems experienced included discolouration; yeasty, sewerage-type smells; slimy deposits in the stream and soapy/frothing water that clogs filters in irrigation systems. The source of the pollution was identified as the Libstar 3 plant on Chamonix farm.

According to Libstar’s corporate brochure: “The Group concentrates on supplying the needs of the private label segments of larger retailers, the manufacturing of products for brand owners as well as its own branded products and the food service industry.” Libstar’s clients include food service players, including McDonalds and KFC, major retailers such as PicknPay and Woolworths, large brand house such as Unilever, Tiger Brands and Nestlé.

The primary users of water from the La Cotte stream are a number of down-stream farmers, who use it for irrigation purposes, and the Franschhoek Cellar, that uses it for cleaning purposes as part of the wine making process.

As a result of the pollution Franschhoek Cellar has had to incur additional costs, as they had to replace the water they use from the La Cotte stream with municipal water. Franschhoek Cellar’s owners, DGB (Pty) Ltd indicated to the Tatler that they “will not be claiming reimbursement at this stage, but reserve the right to institute a claim if the situation regarding the pollution is not rectified.”

Water quality analyses by downstream water users in November 2016 and January 2017 showed acidification of the water, increased dissolved solids and increased levels of Sodium, Potassium, Calcium and Magnesium. The January tests also showed increased E coli levels – although these were still within the environmental disposal limits.

(The comparison is between samples taken from the La Cotte stream at points above and below its confluence with the Chamonix stream.)

In response to questions from the Tatler Libstar acknowledged that “there have been some issues that were identified during the start-up and commissioning of the new effluent treatment system at our water bottling operation on the Chamonix farm.” According to Libstar “A faulty pump control resulted in sporadic overflow from the waste water handling system from the cool drink and water bottling plant.” Libstar also pointed out that “the installation and operation of the plant falls under the landlord’s jurisdiction.”

·         Installation of alarms in the buffer tanks to alert management if levels surpass a predetermined safe level,

·         Further improvement of the wastewater treatment system is being conducted by Libstar’s wastewater treatment contractor. This is included in Chamonix’s Water Safety Plan which will be submitted to the Dept. of Water and Sanitation (DWS) and Stellenbosch Municipality.

·         Irrigated treated effluent is monitored monthly in accordance with DWS requirements, ad hoc internal monitoring is done and an independent laboratory is recording regular samples of the irrigated effluent and the water quality in the stream.

Relevant authorities, including Stellenbosch Municipality, the Western Cape Department of Environmental Affairs and Development Planning and the Department of Water and Sanitation are aware of the work that has been done and continue to monitor the situation. 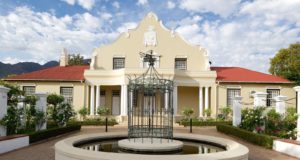 Siegfried Schäfer - 3rd Nov 2018
Stellenbosch Municipality is far advance in a project to identify, classify and digitally map its rich and diverse heritage resources. The municipality contracted with...