“Change the first five years and you can change anything.”

History, says Lynette Carolissen, principal of the Klein Handjies Preschool at Boschendal, may well show that the decision by Boschendal’s new owners to support this preschool was the most beneficial of all the changes and improvements that they have brought about since taking over the estate in 2012.

The school is an initiative by the Franschhoek estates Solms-Delta and Boschendal.  It moved to its new buildings on the Boschendal estate a few months ago and here its numbers have been augmented by children from the Boschendal community.

Lynette has been a nursery school teacher for most of her life but, she says, the Klein Handjies Preschool, which currently has 51 children aged from three months to five years, is far and away the best she has ever been involved with. She says there are six main reasons for this.

·         It is set in a clean, calm, beautiful farm environment well away from the big towns and cities which can have negative, harmful influences on young children.

·         It has sufficient staff (seven in all) and this means that great attention can be paid to the individual.

·         It has spacious and adequate floor areas in beautifully refurbished cottages, the quality of which is appreciated not only by the children but by the parents and staff.

·         It is well equipped with books, art materials, educational toys (which are regularly changed and updated), stationery, a playground with its own vegetable garden (maintained by the older children) and a jungle gym.

·         It feeds its children throughout the day with breakfasts, morning teas, lunches and afternoon snacks.  What is more, the food is healthy and nutritious, most of it emanating from Boschendal’s farms and much of it also prepared in Boschendal’s Werf Restaurant.

·         Most importantly, it makes full use of Preschool for Africa’s Play with a Purpose Programme.  The Play with a Purpose systems and educational kits were introduced in 1991, were developed in South Africa and are widely considered to be ground-breaking in child development initiatives. The programme is based on a neuro-scientific framework and behaviour-based theories originally developed by Professor James Heckman, who won a Nobel Prize for his work in this field. He was able to show that the economic return on investment in Early Childhood Development (ECD) was up to 17 times greater than the same investment in high school education. Prof Heckman’s findings have validated the Play With A Purpose approach, showing that the human brain develops and learns more in the first five years of the child’s existence than at any later stage.  If, therefore, children are exposed to interesting, stimulating activities at this stage their chances of coping with later educational demands, even under very difficult conditions such as overcrowding, will be much improved.

“What makes the Play With A Purpose programme so revolutionary,” says Harvett, “is that previously too little thought was given in farm schools of this kind to stimulating and developing the minds of our youngest children.  If the preschool was comfortable and the children were looked after and kept amused that was often thought sufficient.  It is only quite recently that it has been understood that these initial years of a child’s life are crucial to its later ability to learn and adapt.”

In 2017 Klein Handjies will more than double its current intake and former farm cottages on the school site are being renovated to make this possible.

“This means,” says Harvett, “that it will in time be able to take on pupils up to Grades 1 and 2 – and later possibly they will be able to go even further.  It is likely that this school will set new standards for farm education in the Boland and will find many imitators.” 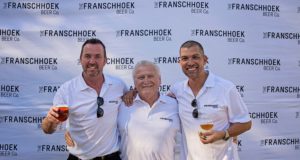 Franschhoek about to become famous for… beer!

Siegfried Schäfer - 1st Jun 2017
What started out as friendly banter between two friends on a golf course, quickly turned into a dynamic partnership when celebrity chef Reuben Riffel...