The Kusasa Stars to travel to Sweden

A group of 19 very fortunate 12-year-old boys from Groendal will be travelling to Gothenburg in Sweden to take part in the Gothia Cup 2018.

The Gothia Cup, also known as The World Youth Cup, takes place in Sweden annually and is the largest football tournament in the world. The opening ceremony takes place in the Gothenburg Olympic Stadium and is often attended by over 40 000 spectators.

Logistically the Gothia Cup is impressive. Over a period of a week, from 15 – 21 July, around 1700 teams from 100 nations will play 4500 games on 110 fields. It is however the teams and participants from all around the world that make the tournament a unique meeting place for the world’s youth – irrespective of religion, skin colour, or nationality with football as the common denominator.

The 19 KUSASA Stars, as the team is called, will depart Franschhoek on 13 July on what promises to be an unforgettable and life-changing trip.  Organisers hope that the trip will open their eyes to the world of possibilities that exists beyond their everyday experience.

All the team members have been selected on merit by coaches from South Africa, Sweden and the UK. Criteria used in selection included football ability and the flexibility to adapt into a team.

In a related development 450 pairs of football boots have been donated by Swedish boys and girls teams from Stockholm. These have been distributed to not only the KUSASA Stars team, but also other football and rugby teams in the Groendal community.

Team leader and tour organiser, George Frett, has already obtained passports for all the boys and the two South African coaches.  George says that fundraising is continuing in order to defray costs related to the purchasing of visas, flights, food and accommodation.

George is already working with local charities The KUSASA Project, Hope Through Action and SCORE to try to make the trip to the Gothia Cup an annual one for deserving boys from Groendal.

Anyone wishing to assist The KUSASA Stars is welcome to contact George Frett at george1958@postmaster.co.uk. 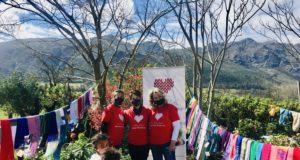 Siegfried Schäfer - 30th Aug 2021
67 Blankets for Nelson Mandela Day did their annual scarf handout at the La Motte feeding scheme on 19 August in conjunction with one...