The company was established in 2015 when Dr Henrich became aware of the possibility of doing hydroponic farming locally. He acquired the professional skill he needed from two gentlemen who are experts in hydroponics and marketing and went on to find a 7.5 hectare farm in Klapmuts. Work started in 2016.

Here’s what happens now. Lettuce seeds are bought and planted in plastic trays which are placed in the farm’s nursery. After five to six weeks the little plants are big enough to go to the hydroponic facility. Here they are placed in holes on a long table, with their roots in a channel below. The channel has circulating water to which carefully measured amounts of appropriate nutrients have been added. The water used comes from a borehole on the farm and is eminently suitable for the purpose.

Once matured in the tunnels, the lettuce heads are harvested, taken to the packing house on the farm where they are trimmed, wrapped and packed into cartons, before going to cool storage from where refrigerated trucks transport them to the retailers.

The up-side of these hydroponically-cultivated lettuces is that they are healthy, require very few chemicals, have a comparatively small footprint and use less than 10% of the water per head that is needed for open-land farming. It is a proven economical and effective process which is especially important during droughts.

Demand has exceeded production and Cultura Fresh reached an Outgrower Agreement with an adjoining farm. It is a BEE farm with which they transfer technical know-how, guarantee 100% uptake of production and do the marketing for, allowing the farm to concentrate on cultivation and the training of the young farmer. Cultura Fresh is keen to offer other established or new farmers advice, support and uptake agreements. They believe there are people with land who have water and some capital who could make use of this offer and become successful hydroponic farmers.

Dr Henrich says, “Experience shows that the market for lettuce and vegetables is substantially larger than anticipated – locally and in neighbouring countries. Hence there is space and incentive for new or established farming communities to join hands with Cultura Fresh.” 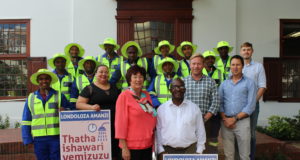