Boschendal offers all that you’d expect of a wine estate – restaurants, wine tasting, picnics – and then some!  Also on offer are half and whole day spa treatments, walking and mountain bike excursions (on 30 km of new trails), fly fishing – and horse riding.  It can be stated quite categorically here that if ever there was an enthusiastic team it is that which now runs the equestrian activities.

The equestrian team is headed by Hans Mbalula and his brother Petrus.  Hans was formerly a barman at Boschendal’s deli/Werf restaurant/picnics), but on hearing Boschendal’s CEO discussing the pros and cons of riding and related activities on the estate he immediately volunteered to give up bartending and to run this new initiative.

It transpired that he had, in fact, been raised on a Free State farm and as a boy had ridden regularly before and after school to carry out a variety of farm duties such as cattle and sheep herding.  He had, too, it was discovered, learned early on how to win the confidence and calm down a wild horse so that within a few days (often in fact within one day) he could saddle and ride it without any of the bronco busting histrionics of the Wild West’s cowboys.  He had also learned how to put horses into harness to pull a cart or a plough, again using a minimum of force and a maximum of coaxing.

Boschendal now has 13 horses, including a few Shetland ponies, the majority of which are massive Shire horses, Friesians, Clydesdales and Percherons, all of them giants of the horsey world – they grow to 16 hands or more.  Being immensely strong, they are capable of carrying a 100 kg or 110 kg rider in armchair comfort.  Surprisingly, however, they are also quite exceptionally gentle so that, despite their size, they can be and sometimes are ridden by quite small children.  A few lucky riders are offered the opportunity to mount these massive horses, but most of Boschendal’s outrides are done with well-trained smaller horses.

Today the Boschendal horses can be hired for outrides and these usually take the visitor into unspoilt conservation fynbos territory where waterbuck and eland have been introduced by Boschendal’s owners.  For those prepared to rise early Boschendal offers a breakfast ride in its extensive conservation territory with delicious eggs, bacon and mushrooms cooked over an open fire.  The rides can last up to three hours and afford the visitor a total escape from the overcrowded mechanised world.

Shire horses are, however, at their most impressive when they are acting as draught animals.  Their huge size make it possible for them easily to pull carts, the weight of which would bring lesser horses, even fully trained hackneys, to their knees.

At Boschendal the management now offers visitors one-hour cart rides almost daily. The carriage can take a small number of adults and a larger number of children.  Passengers sit on a beautifully restored 19th-century landau and this gives them a tranquil lovely way to see the estate and to watch these big horses working so willingly.  The foremost carriage pair are black Friesian mares.  They are sisters and are named Queen Victoria and Queen Elizabeth.  Their names are appropriate because they exude a patrician, almost regal ambience, as if aware that they are several cuts above today’s typical livery stable animals.

Booking is essential for a carriage ride, but, as Samantha Lundie, wife of the CEO of Boschendal who is closely involved with this operation, has said, “An overnight visit to Boschendal these days is incomplete without a carriage ride – it somehow epitomises all that the estate stands for.” 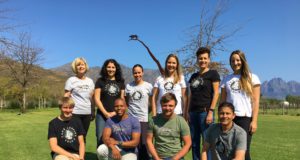 Siegfried Schäfer - 2nd Oct 2017
Spotting a leopard in the wild is a rare and special experience. A sighting apparently almost as rare is to find the entire Cape...