Boschendal Estate has been awarded the Angus Society of South Africa 2016 Trophy for the best Black Angus commercial breeder in the Western Cape.

“What is particularly pleasing about this award,” says Rob Lundie, CEO of Boschendal Estate, “is that we, the new owners, only started work on our first plans for the expansion and upgrading of the Black Angus herd in 2014, almost two years after we took over the estate and at the time the herd was small.  What has been achieved, therefore, has been done in a relatively short space of time. The team here deserve congratulations.”

The team in question is headed up by Jacques du Toit, General Manager of Boschendal Farm, and the man directly responsible for the herd, Jason Carroll.  When Jacques arrived at Boschendal in 2013 there were only 230 Black Angus cattle on the estate.  By the time Jason took over in 2015 there were 320 and today the figure stands at just over 700.  Boschendal management is confident that it will grow to 1 000 in the near future.

Cattle breeders, however, do not win major awards such as that mentioned above simply by increasing the size of their herd.  They have also to prove that the quality of their herd is superior to all other commercial herds.  The Boschendal commercial herd has been bred from the best available stud stock and is itself managed as a stud herd.  The quality of its animals is therefore continuously improved, but what makes this award even more gratifying, says Jacques, is that the herd is one of relatively few to be registered as grass fed and it is highly unusual for such herds, in this case with the pasture feeds supplemented only by salt, to achieve the highest standards.

According to Jacques and Jason one of the critical factors behind their success was the attitude of Boschendal’s management and Rob Lundie in particular. From the start, they say, he was determined to farm in an ecologically correct, sustainable way and was therefore prepared to change methods and systems.  What is more, says Jacques, he was always ready to experiment and to risk failure in order to achieve the standards to which he aspired.

As this is a pasture fed herd, one of the prime beliefs of the new management team was that its beef quality would depend largely on the soil health of the areas in which the herd grazed. “Good soil health,” says Jacques, “leads directly to healthy nutritious pastures.”

The beef and sheep pastures at Boschendal, he adds, have been sown by the new team with at least 18 different summer and sub-tropical grasses, legumes, brassicas, cereals and chenopods and the resultant ‘salad bowl’ is highly nutritious.

The upgrading of the pastures was in part the result of action taken by Jacques early on in his career at Boschendal.  He took samples from a variety of areas on the estate and sent them to the Brookside Institute in the U.S. for analysis.  He then followed up by submitting samples from part of the farm where the soil had never been cultivated by man.

“The difference between the cultivated and uncultivated soils was quite staggering,” says Jacques.  The soil exploited over centuries has an organic/microbe soil health of only two, whereas the virgin soil was rated at 23.

“We found, however, that by irrigating our new multi-crop pastures from three mobile centre pivots (one covering 25 ha and two covering 10 ha) we were able in just one year to improve the soil health to a point where it was rated 11,5 and this was achieved without using any commercial fertilizers.  Furthermore, as the improved soils have a radically higher carbon content and more humus, we have been able to retain moisture more efficiently, which in turn has enabled us to reduce our irrigation water by 30%.”

The reliance on pastures has meant that the Boschendal team has completely shunned the widely adopted practice of supplementing feeds with maize.

“Our goal,” says Jacques, “has been to produce cover crops so attractive to and right for the cattle that they will put on weight and stay healthy.” For the record, Jason has in the last few months had to treat only six sick cows, all of which recovered.

Another crucially important factor in upgrading soil health has been the introduction of high-density strip grazing.  This is achieved by containing the herds to small areas by fencing them in with mobile electrified fencing.  This ensures not only that the pastures are thoroughly grazed but equally, if not more importantly, that they are well manured, the cattle droppings being trodden into the soil.

Intensive farming of this kind, with high density strip grazing on multi-cover cropped centre pivots (total of 45 ha), says Jason, enables Boschendal to stock as many as eight cows per hectare, whereas in the Western Cape beef breeders usually allocate not more than one cow to six to eight hectares of dryland pastures.

Boschendal Black Angus cattle are never slaughtered as calves.  They are allowed to grow to three or more years before being sent to the abattoir at Malmesbury and here, to lessen the suffering of their final hours, Jason who delivers four cows per week, makes a point of being the first to arrive in the early morning.  Plans are now being drawn up to have an abattoir on the estate.

Those who have kept in touch with Boschendal’s expansion will know that the fruit orchards are also being extended from 50 ha in 2014 to 250 ha in 2017 so that the estate will have just on half a million fruit trees, but, says Jacques, the beef, vineyard and fruit production are complementary because when the vineyards and orchards are dormant and without leaves cattle can graze in them as they, too, have cover crops.

“Throughout the world,” says Jason, “there is a widely held opinion that Black Angus cattle, which originate from the lush pastures of Scotland, produces the best and most flavourful beef anywhere.  I can testify that I have never come across a meat that can compare with it.  For those dining at Boschendal’s four restaurants and two picnic venues it is, I like to think, comforting to know that all their meat and poultry have not only been pasture fed nearby but also managed by a caring and very dedicated team.” 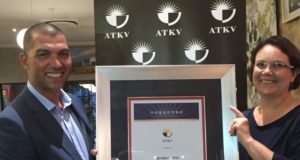