South Africa’s best culinary talents were honoured at the 2016 Eat Out Mercedes-Benz Restaurant Awards on Sunday, 20 November. Franschhoek restaurants didn’t win any of the big prizes, but were well represented with three claiming places among the top 10.  They are: The Tasting Room at Le Quartier Français (4th), The Kitchen at Maison (8th) and Foliage (9th).

For an unprecedented fifth consecutive year, The Test Kitchen was named Restaurant of the Year.

Gregory Czarnecki of The Restaurant at Waterkloof won the coveted title of Eat Out S.Pellegrino & Acqua Panna Chef of the Year.

La Colombe was recognised for maintaining the highest level of service with the Eat Out Nespresso Service Excellence Award and the first-ever Eat Out John Psillos Award for Outstanding Contribution to Service, which was awarded to front-of-house manager Jennifer Hugé.

The much-admired chef, restauranteur and author Peter Veldsman was the winner of the Eat Out Lannice Snyman Lifetime Achievement Award.

The Eat Out Nederburg Rising Star Award went to Angelo Scirocco of Urbanologi in Johannesburg for his promising talent, and the Eat Out Wine Service Award for a top sommelier was won by Tinashe Nyamudoka of The Test Kitchen.

In another industry first, The Table at De Meye in Stellenbosch was the recipient of the inaugural Eat Out Woolworths Sustainability Award, which recognises a restaurant that is making strides towards sustainability by implementing environmentally and socially responsible practices and being cognisant of the importance of higher animal welfare.

Foxcroft, the new restaurant opened by chefs Scot Kirton and Glen Williams of La Colombe, was named the Eat Out Retail Capital New Restaurant of the Year. Marble in Rosebank, Johannesburg, received the Eat Out Boschendal Style Award for its show-stopping interior design and décor. The winner of the Woolworths TASTE Eat Out Bursary was Ayanda Matomela, who was selected for his passion and enthusiasm. 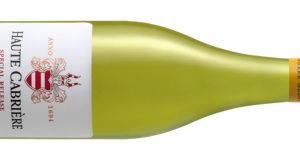 Siegfried Schäfer - 23rd Jun 2020
Haute Cabrière has partnered with Together Franschhoek to create a new Purchase with Purpose opportunity to support COVID-19 disaster relief in the Franschhoek Valley....