Sarah Ruth Eichler (8) who lives outside Franschhoek on the R301 was recently crowned Miss Petite South Africa 2018 in Pretoria. In May next year she is invited to attend the Little Miss Universe pageant in Turkey.

This is how it happened. Last year Sarah was selected to represent the Western Cape as a Mr & Miss Junior South Africa 2018 finalist. She was one of nine 7 to 8 year olds from around the country in the Miss Petite age group. At the pageant the contestants were judged in different categories: casual wear, evening wear and interviews, and for fun there was also a themed wear round for which the organisers chose ‘Futuristic Sci-Fi’ as a theme this year. Sarah went as a futuristic ballerina.

Sarah attended the pageant along with her mother, modelling coach Reana van Tonder and ten other models (and their mothers) from her modelling school. These pretty girls brought home four of the main titles as well as several runner-up titles to the Western Cape.

At home, Sarah is a bubbly, determined and a real girly girl; she loves unicorns, attending ballet lessons, dressing up and trying on makeup. She says that wearing princess dresses and spending time with her modelling friends are what she enjoys most about pageantry and that being in the limelight makes her feel excited. Her older sister was a pageant queen and she couldn’t wait to be old enough to follow in her sister’s footsteps.

She is the third of five children and says, “My siblings are my best friends.” Together they ride their bikes, play ball games, climb rocks on the farm where she lives and in summer they swim a lot. All five children are home-schooled by their mother with Sarah currently doing Grade 3. Her favourite subject is spelling and she is currently reading The Girraffe and the Pelly and Me by Roald Dahl.

During her year of reign, Sarah will be attending various events as a VIP, supporting a number of charities (like Dance For All, Little Fighters Cancer Trust and the SPCA) and trying to find sponsors in order to raise the funds needed to participate internationally in Turkey. Sarah admires Demi-Leigh Nel-Peters, South Africa’s Miss Universe 2017, and dreams of also entering an international pageant. She says, “When I first saw Demi on TV I saw that she was one of the shortest contestants. She showed me that dynamite comes in small packages and even though I am little, I can still change the world.”

If you would like Miss Petite South Africa 2018, Sarah Eichler, to attend your function/charity event or if you would like to become one of her sponsors, please contact her mother at misspetitesa@gmail.com. 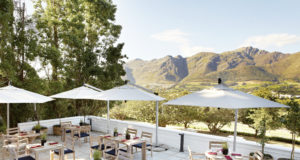 Siegfried Schäfer - 31st Jul 2020
Mont Rochelle’s The Country Kitchen restaurant reopens its doors to guests from the beginning of August. Just in time for the start of spring...