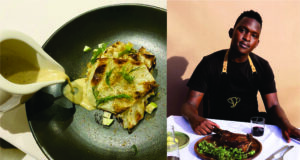 Siegfried Schäfer - 10th May 2022
Before dinner I wondered whether Chef Vusi Ndlovu, whose surname means elephant, knew that Franschhoek was first known as Oliphantshoek (Elephants Corner). He did....