It’s been a long time coming but the new stalls for informal traders next to the town hall are finally being used. Executive Mayor Gesie van Deventer officiated at the opening of what is now dubbed the Franschhoek Art & Craft Market on Friday, 13 November.

The site has been used for informal trading for more than 15 years. Historically traders had to erect temporary structures every morning before unpacking their wares – only to have to break down the structures again in the evening. Not only was this cumbersome, but it also led to noise complaints from nearby residents.

In 2017, Stellenbosch Municipality as part of its commitment to promote informal trading as a means to increase household income decided to upgrade the trading site and improve aesthetic and operating conditions to the benefit of both the traders and the local community.

Rekha Construction was awarded the contract – to a value of R2.226m – for the upgrade of the trading site in March 2018. Construction started in June 2018 and took 18 months to complete after some unexpected but unavoidable delays.

In her opening remarks, the mayor explained the reason for the new contract-based management system to the assembled traders and other interested parties. She also informed them that now that they aren’t simply transient traders any more efforts can be made to enrol them for support courses offered by the Department of Trade and Industry.

After cutting the ribbon the mayor, accompanied by the ward councillor and officials, inspected the wares on offer. 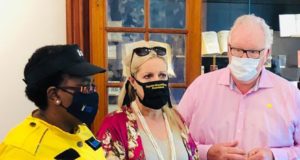 Siegfried Schäfer - 1st Apr 2021
The Minister of Tourism Honourable Mmamoloko Kubayi-Ngubane spent 24 hours in Franschhoek on Thursday, 18 March 2021, as part of an outreach programme to...