Stellenbosch mayor, Adv. Gesie van Deventer, now has an office in Franschhoek.  The Mayor spends the first Friday of every month in Franschhoek. Upon taking office in August 2016, Mayor van Deventer realised that taking frequent meetings in the boardroom of the municipal buildings is not ideal. She needed an office space where she can work and receive appointments in a professional environment.

Mayor Van Deventer says that having an office here is very important to her. “I needed a professional space where I can work and engage with the community. When I took office I became aware that residents of Franschhoek felt left out and not part of the greater Stellenbosch. In the interest of being accessible to all, and to demonstrate to the residents how important they are to the Municipality, I reopened the Mayoral Office in Franschhoek, so that I can actively engage with the community and address concerns they might raise.” 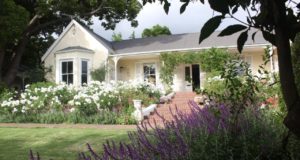 Siegfried Schäfer - 2nd Jan 2017
The Garden House does it again! For the second year running Tripadvisor ranked Annette Phillips’ Garden House as its Top B&B for 2017 in...