As the most-watched sport at the Olympic Games, and one of South Africa’s top performing codes in the tally of medals, swimming gets relatively little attention from the media outside of an Olympic year.  African swimming as a whole seems to keep an even lower profile outside of the aquatics community, but the sport’s continental federation, Confédération Africaine de Natation (CANA), has been steadily building participation and development among its 54 member countries.  Egypt has a particularly strong showing in the sport, with around 175 000 registered participants – compared to 65 000 in South Africa.  The federation is headquartered in Johannesburg, and divided into four zones that include continental Africa and island nations like Madagascar, Cape Verde, Mauritius and Seychelles.

This week, Train Camp is bringing swimmers, coaches and officials from 22 of CANA countries to the Maties Swimming pool deck in Stellenbosch – which has become the premier destination for local and international aquatics training camps over the past few years.  Maties Swimming Head Coach, Cedric Finch, is excited at the prospect, saying, “We’ve hosted world champions and Olympic medallists from around the world, but to have swimmers from so many countries at one train camp is something special.  It gives a real cross-section of where African swimming is right now.”

This CANA train camp brings athletes together from as far afield as Djibouti and Tunisia, and marks the beginning of a close association between the federation and the Cape Winelands.  CANA Vice-President and Treasurer-General, Jace Naidoo, said, “Sports tourism in Africa has been focused mainly on the Western Cape, and particularly the Winelands, for quite some time – but it’s largely ad hoc and quite fragmented.  Establishing this region as our federation’s primary training camp destination will make the swimming part of that market more structured and predictable.  There are great opportunities for long term development as well, and going forward young swimmers from across the continent will come here to train, attend the local school and develop their swimming careers.  It is critically important for athletes to train in a stable environment – with strict protocols to ensure their safety, as well as access to quality education.  Stellenbosch University has understood that, and shown real vision to support the South African federation by establishing a national Centre of Excellence facility.”

Franschhoek Tourism is hosting a brief tour of the valley for officials from the camp exploring the area. Train Camp Commercial Manager, Darryn Marshall, explained, “This is a chance to introduce 22 countries – of the 54 we will be bringing to the region – to Franschhoek, and show them the high standard of infrastructure and facilities here.  As a destination, it’s among the best in the world.  It’s a great privilege that CANA has accepted our proposal to make this region the custodian of their future athlete development strategy.”  The tour will be joined by struggle icon and CANA President, Dr Sam Ramsamy, who added, “African swimming has always had to overcome preconceived ideas, but as a continent we’re beginning to claim our rightful place in the global sport.  The Winelands has world-class facilities, world-class expertise – and from here we’ll produce world-class performances.  This is just the beginning – soon the whole world will be talking about what’s coming next for sports tourism in this region.” 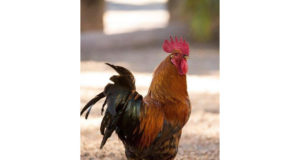 Siegfried Schäfer - 25th Oct 2016
He was the most famous rooster in the land, but alas he is no more.  Hendrik, the much loved, feared and respected mascot of...