Chamonix Estate finds itself on top of the wine world after its Chamonix Chardonnay 2018 was named the Best Scoring wine at this year’s Michelangelo International Wine and Spirits Awards. This wine not only won the Grand Prix Trophy for Best Scoring Wine, but also the Chardonnay Trophy for achieving the highest score from the 109 Chardonnays entered into this South Africa’s largest and most comprehensive wine show.

Stefan van Rooyen, CEO of Chamonix Estate, says winning this award is one of the highlights in the history of Chamonix, whose status as a leading wine producer was driven by the vision of its late owner Chris Hellinger, who bought the farm in 1991. “This Michelangelo accolade is the first major award Chamonix has won since Mr Hellinger passed-away in 2018, and it is ironic that this winning Chardonnay was made from his last vintage on the farm,” says Van Rooyen.

According to Neil Bruwer, Chamonix’s cellarmaster, both Michelangelo awards came as a huge surprise of which he and his team are unashamedly overjoyed.

“With the amount of top-quality entries the Michelangelo Awards attract each year, one enters to see how your wines compare to those of your peers. And if a Gold Medal or, perhaps a Platinum Award, comes your way, you consider it a job well done,” he says. “But to be named the top Chardonnay out of over 100 entries at a time when South Africa is making such brilliant wines from this grape is the kind of accolade one can only dream of. About being adjudged the Michelangelo’s overall Top Scoring Wine, well, I can’t comment at this stage. It still has to sink in.

Grapes for the Chamonix Chardonnay are selected from vineyards situated at between 380m and 400m above sea-level growing in sandy loam soils that are threaded with runs of clay and lime. For optimum expression and general intensity of Chardonnay character, vineyard planting is quite dense at between 4 500 and 5 000 vines per hectare, ensuring the vines compete for sustenance and thus bear fruit of concentrated and distinctive profile.

“No white variety shows soil, aspect and climate such as Chardonnay,” says Bruwer. “So, in the cellar we watch-over the wine with sets of eagle-eyes, but just to ensure that the natural processes run smoothly. The grapes are soft-crushed and the must fermented in French oak for between 15 to 25 days, depending on what the batches of grapes look like. The wine then spends 12 months in barrel, some 20% new, with regular lees stirring.”

Bruwer says he and the Chamonix team are busy celebrating these accolades with a few bottles of Chardonnay, but will have to take it easy. “Wine awards play a major role in attracting interest from the consumer, and we will ensure there is enough of the awarded wine for the market,” he says. 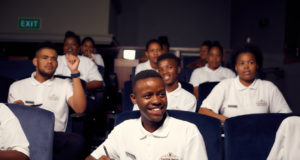 Siegfried Schäfer - 30th Jan 2020
Showcase your Sequins, Silks and Satins at the Annual Grand MET Fundraiser in support of the Franschhoek Hospitality Academy on Saturday, 7 March 2020...