Residents of Dirkie Uys and La Rochelle Streets are furious at bus and tour companies whose drivers wilfully ignore the 3.5 tonne vehicle weight restriction applicable to these mostly residential streets.  They also expressed frustration at the apparent lack of traffic law enforcement in this regard.

According to one irate resident no fewer than five tourist coaches illegally drove along Dirkie Uys Street from the Huguenot Museum to the Dutch Reformed Church grounds on the morning of Saturday, 11 November, alone. Two of them went even further and instead of parking in the church grounds parked in La Rochelle Street, only metres away from a 3.5 tonne weight restriction sign.

Residents who have confronted drivers of offending coaches say they have been met with rudeness and arrogance when pointing out that coaches are not allow in Dirkie Uys Street.  A common response is “The tour guide made me do it” as if that excuses ignoring road signs.  Another oft-heard response from drivers is along the lines of “If you don’t want us to bring you tourists, just say so.”

Approached for comment Reinher Behrens, CEO of Franschhoek Wine Valley, said: “Franschhoek welcomes tourists whether by car or coach. In most popular tourist destinations clear parking areas and routes are demarcated for tourist coaches as well as areas and routes where restrictions apply. The use by tourist coaches of Dirkie Uys Street, which carries a 3.5 tonne vehicle weight restriction, continues to be a concern. Threats and confrontation will get us nowhere.  My suggestion is that we arrange a meeting with the relevant coach operators and agree on a way forward.” 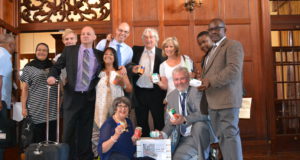