Superficially blocks S and T of the Langrug informal settlement may look much the same as the other blocks. Looking a little deeper though, one soon discovers that something exciting is happening here and the differences suddenly become obvious. Plastic litter that seems to be everywhere in the settlement is absent here. So are the open streams of foul wastewater. The path between the shacks has a curb to give it a level surface and channel storm water to the nearest storm water drain.  Perhaps most strikingly the informal road is paved with open grass pavers and there are large indigenous trees every few metres along the road.

The reason for these differences is a project called The Genius of SPACE.  This project is part of the Western Cape’s 110% Green Initiative and the Berg River Improvement Plan. It seeks to address two of the province’s strategic priorities: water quality in the Berg River system and the green economy. What the project is doing is establishing innovative biomimicry interventions that when applied, successfully adopted and implemented to the Berg River area, could have a desirable impact on the province’s environment and economic growth as well as improving health in all the people affected by the river.

The project has been through several phases involving community participation and co-planning, with phase 4 (construction) finally starting in January 2016.  The aim is to mimic nature in creating a living sewer, using the principle of treating water as it is transported to support the greening of Langrug with readily available nutrients and water.

Briefly the system works as follows: A series of greywater disposal points have been constructed and linked via underground pipes to miniature wetlands and tree gardens – hence the absence of open sewers. These specially designed wetlands start purifying the water as it moves down the slope from wetland to wetland and ultimately to the municipal sewer system. The system is maintained by the community it serves and they also ensure that everybody follows the rules needed to keep the system functioning healthily and correctly.

The project includes monitoring and research by postgraduate students funded by the Department of Science & Technology and the Water Research Commission. Every aspect is being documented with the aim of learning as much as possible. Lessons learned will determine the feasibility of implementing this within the whole community and possibly to other informal (and formal) settlements elsewhere.

Further phases will include solid waste collection points and encouraging entrepreneurship with regard to waste recycling and upcycling.  The use of ecomachines (biomimicry wastewater treatment systems) for treating stormwater at source is the next focus area of the project, which is planned for construction on a section of land adjacent to the Groendal Secondary School soccer field. 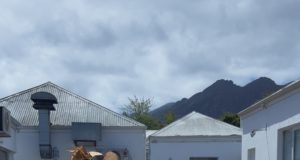